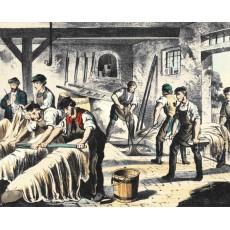 Early man probably discovered tanning of leather by accident it is thought, when finding animal skins that had been lying in pools full of rotting leaves and bark (from Oak trees most likely),they were found to have ‘cured’ and stopped putrefying. Once in this stable state he was able to soften the hides using fats and oils rubbed in to the skins and make use of them for clothing, footwear, weapons and weather proofing.

With the passage of time, man became more sophisticated in his methods and realised that by scraping away the excess flesh and fat he could refine his leather. Followed by a process now known as liming he took ash from fires and made up a solution which aided his efforts to remove the hair from skins.

This process where the tannin (derived from the Latin ‘tannum’ or Oak bark and also an old German word for Oak or Fir tree) found in Oak and similar trees had saturated the water to form a tanning solution, is the basis of the process still carried out today by some tanners such as Bakers of Colyton, Devon known as Oak bark tanning which is the first and most original process of vegetable tanning.

Vegetable tanning is still much in use across the industry today and produces a mellow, supple leather for use in most aspects of manufacture, usually at the upper end of the market as with handmade shoes, best quality leather goods and widely in the equestrian industry for bridle and harness work as well as saddles.

The qualities introduced to the leather by this tannage, give breath-ability, durability and a look to it that when combined with aniline dying set the leather miles apart from any other tanning method such as Chrome tanning, the modern and more widely used method and various combinations of the two processes.

The majority of antique leather goods will usually be of vegetable tannage due to their ability to stay supple and take in various fats and oils from leather care treatments. Old suitcases, shoes, saddlery shooting and fishing accessories regularly pass through my hands which would have disintegrated long ago were they to be of the stiffer, dryer and more brittle Chrome tanned sort.

There will be more on this subject and especially chrome tanning in the next part of this series of articles.