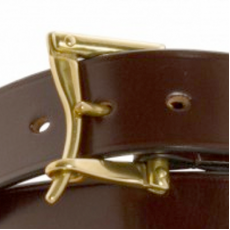 The Quick Release Bridle Leather Belt Buckle owes its origins to the firemen of yesteryear. During the 'Great Fire of London' we believe, early fire tenders equipped with this type of buckle on straps retaining the coiled leather hoses, utilised its quick release mechanism to free their hoses with speed.

The unique Quick Release Leather Belt, the first one of its’ kind made by Tim Hardy in the mid-nineties but now available from other makers in varying qualities, came about purely by chance when he discovered an old 1” pattern in a market in Ludlow, England.

Snapping it up for pennies, he remembered its origins and the fact that this single hand opening facility has obvious and numerous advantages for a trouser belt.

Taking the early pattern to his buckle makers in Walsall he asked them initially to recreate them in solid brass 1 ¼” and 1 ½” versions with keepers to match echoing the ‘thumb grip’ on the release arm. This solid brass loop is integral to the design of the belt if it is to be ‘quick’ and sadly some makers think a leather loop will suffice.

Later as demand grew from stores including Denime, Nepenthes and many others globally, solid pewter versions were introduced. Now reaching almost iconic status it is still available here from its originator made especially to measure for you!!